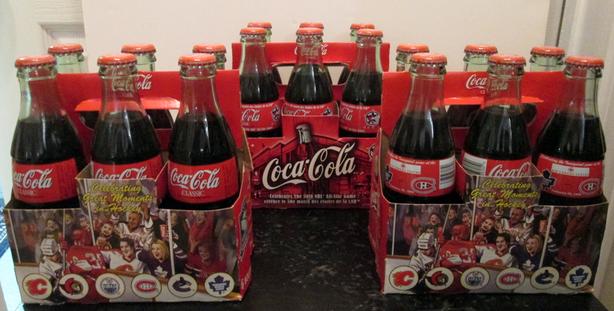 Please note, if you are interested in these items, they must be picked up in Orleans, Ontario. I do not deliver.

I have some real collector items for sale here. If you are a Toronto Maple Leafs fan, or a vintage Coca-Cola bottle collector, or just want these interesting items of hockey memorabilia items for your bar, these items are for you. These are three 6-packs of unopened Coca-Cola glass bottles commemorating 3 different times of Toronto Maple Leaf history. 13, 1999. The cardboard containers show a little wear(they are over 20 years old), but the glass bottles are in mint condition, unopened bottles. Each of the three cases contain six 237 ml glass bottles. The Coca-Cola contained in these bottles has never been exposed to the open air since 1999, but I would not suggest drinking it. These items would make a great gift or conversation starter for any collector or bar. A must-have collectors' item, or nostalgic piece of décor. My preference is to sell all 3 cases together. Individually, I will sell them for $45 each or $110 for all 3. I am open to any REASONABLE offer.

PICK UP IN ORLEANS ONLY - NO DELIVERY